David Simon: My country is a horror show.

David Simon, the creator of that excellent series The Wire, has a very insightful piece on the trend toward "two Americas"--a must read in light of the latest riots in Baltimore.
Posted by Karlo at 9:04 am 0 comments

A 2014 study by Glass and Levchak in the American Journal of Sociology shows that conservative protestants (and, surprisingly, people who live around them) are more likely to divorce. After accounting for factors such as poverty, violence, and southern culture (which tend to go together), the researchers conclude that it's the culture of promoting younger marriages and childbirth that largely explains the result. This map (which is kind of hard to read) shows the tendency of the Christianity and divorce to clump together (the dark blue-green squares). 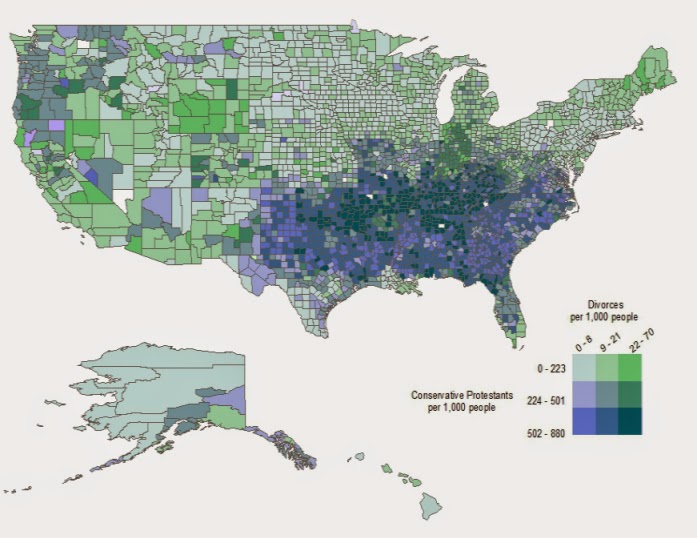 This map could be juxtaposed with a series of maps I discussed a couple years ago in this post.
Posted by Karlo at 9:47 pm 0 comments

I finally got around to watching Interstellar. Since I like most sci-fi (except simplistic human vs. aliens cowboys in space sorts of flix), I found it entertaining. That said, the whole thing was a bit underwhelming. Couldn't they pay a starving students from an astrology department somewhere to come up with a more feasible premise (or perhaps better--simply omit the pseudo-scientific explanations altogether)? Since the film took us to alien planets, it would also be nice to see something more exotic than a couple giants waves and snow covered rocks.
Posted by Karlo at 4:37 am 2 comments