Religious rights for corporations: Where it's all heading... 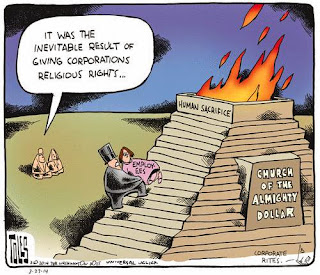 Quote of the month

“The major problems in the world are the result of the difference between how nature works and the way people think.” (Gregory Bateson)
Posted by Karlo at 1:02 am 0 comments

This is a great film that ambitiously covers a lot of ground. I'm always surprised to find gems like this from several years back that I've never even heard of. I suppose it received less coverage since it didn't feature a lot of well-known Hollywood actors.
Posted by Karlo at 5:39 am 0 comments

How to be slim

BBC documentaries range from the mediocre to the superb. This one on weight-loss is in the latter category. I've learned quite a bit about this during the last couple of years as I've lost weight, but a lot of the research they discuss was new to me.

This is a great documentary from a few years back, suggesting that the U.S. is slowly moving towards a slightly more rational policy on scientific experimentation with hallucinogens. Research data have shown that many of the substances are perfectly safe and of tremendous value. Since our society already accepts so much in the way of unhealthy consumption and behaviors, I find it hypocritical that government bureaucrats are allowed to dictate citizens' appraisal of risks, which in the case of some psychedelics (especially LSD), have been shown to be virtually nonexistent.
In other news, D.C. has decriminalized marijuana. Since many of the arrests for pot have involved the city's black population, this is a positive move that will refocus law enforcement to more needed areas.
Posted by Karlo at 8:21 pm 2 comments

I recently finished Michael Pollan's book, The Omnivore's Dilemma. It's a slow and thoughtful reflection on the modern diet options of Americans, ranging from industrial agriculture (based heavily on corn), large organic farms, sustainable "grass farming," and foraging. One thing, discussed in the book, that I'd never given much thought to is how U.S. subsidies end up funding every food producer that utilizes corn, whether its the meat industry, which feeds corn to beeves and chickens, or the other processed food industries that stick corn syrup in virtually everything. U.S. tax-payers are essentially subsidizing the very foods that make them unhealthy and help raise the costs of their healthcare. At the end of the book, Pollan has some interesting philosophical reflections on the ethics of meat-eating, concluding that meat can be ethical if it's produced on farms where the animals move around freely and live according to their natural animal dispositions. If Americans adopted this attitude, it would vastly reduce U.S. meat consumption--which wouldn't be a bad thing. In my own case, I rarely eat meat except for fish. I suppose I could reduce the number of eggs I eat so that I don't support the poultry industry which is said to be one of the least humane.

In related news, Idaho just passed Senate Bill 1337, an "ag-gag" bill. The “agricultural production interference” act contains at least two provisions that fit the definition of an “ag-gag” law. First, anyone who misrepresents himself or herself in obtaining employment in agricultural production will face charges. Second, anyone who records a video or takes picture in a facility not open to the public will also be charged with a misdemeanor.  It isn't enough that corporate agriculture goes to great lengths to hide their practices from the public. Now, it's illegal for reporters to expose practices that are dangerous or ethically questionable.

P.S. I just came across a review of the book by Tyler Cowan. This is one of the worst reviews of a book I've ever seen--I'm quite sure that the author didn't read any more than  a blurb on the cover. You can see my comments (Comment #1) on Slate.
Posted by Karlo at 5:42 pm 3 comments