Alexandre Afonso has an excellent post (Nov. 21) about how the structure of academia, with it's countless desperate and low-paid temp-workers, resembles the structure of a drug gang. The article (and the very nice blog) is recommended to all who work in academia. I strongly suspect that this trend isn't just in academia--the economy of many nations--especially that of the U.S.--seems to be structured more and more like a drug gang.
Posted by Karlo at 6:09 pm 0 comments

The new existentialist threat is upon us!

I can't believe our government's just sitting back and doing nothing about this! OMG! 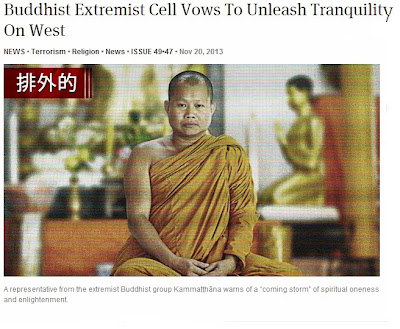 WASHINGTON—In a 45-minute video posted on Tibetan websites Thursday, Tsuglag Rinpoche, leader of the Buddhist extremist group Kammaṭṭhāna, threatened to soon inflict a wave of peace and tranquility on the West.

Speaking in front of a nondescript altar surrounded by candles, burning sticks of incense, and a small golden statue of the Buddha, Rinpoche did not specify when or where an assault of profound inner stillness would occur, but stated in no uncertain terms that the fundamentalist Buddhist cell plans to target all Western suffering.

“In the name of the Great Teacher, we will stop at nothing to unleash a firestorm of empathy, compassion, and true selflessness upon the West,” said Rinpoche, adding that all enemies of a freely flowing, unfettered state of mind will be “besieged with pure, everlasting happiness.” “No city will be spared from spiritual harmony. We will bring about the end to all Western pain and anxiety, to all destructive cravings, to all greed, delusion, and misplaced desire. Indeed, we will bring the entire United States to its knees in deep meditation.”

According to reports, Rinpoche stressed throughout his address that Kammaṭṭhāna soldiers would continue waging a tireless holy war on Western feelings of emptiness and negativity for as long as necessary, noting that “a jug fills drop by drop” and that “it is better to travel well than to arrive.”

The extremist leader specifically criticized the United States for its “blatant disregard of karmic balance within the universe” and ominously claimed that Americans will “one day soon” experience the highest form of metaphysical equilibrium through a union of both body and mind. Rinpoche also said all Western nations would “pay a heavy price in negative thinking and self-doubt” if they do not immediately engage in serious introspection and true spiritual liberation.

Sources confirmed the video then featured an uninterrupted 19-minute clip of water quietly flowing between rocks in a small forest creek.
Posted by Karlo at 4:42 am 0 comments

Kshama Sawant, from the Socialist Alternative party, has won a seat on the Seattle city council! She has some great ideas, ranging from a $15 minimum wage to massive cuts in the U.S. military. Seattle always appears to be a step ahead of the rest of U.S.
Posted by Karlo at 9:09 pm 0 comments

A recent article in BMC (an academic journal) has found that a large portion of herbal substances contain none of the herbs they're supposed to contain, contain related herbs that are toxic, and/or contain fillers that cause allergies in many people. Since many of these herbs haven't been shown to work in the first place or aren't effective in the small doses shoved inside a capsule, this news is just one more reason for all of us to reconsider whether these pills are really worth the money. This is from the article's results section:

We recovered DNA barcodes from most herbal products (91%) and all leaf samples (100%), with 95% species resolution using a tiered approach (rbcL + ITS2). Most (59%) of the products tested contained DNA barcodes from plant species not listed on the labels. Although we were able to authenticate almost half (48%) of the products, one-third of these also contained contaminants and or fillers not listed on the label. Product substitution occurred in 30/44 of the products tested and only 2/12 companies had products without any substitution, contamination or fillers. Some of the contaminants we found pose serious health risks to consumers.
Posted by Karlo at 1:39 am 0 comments