The Laissez-Mourir Approach to Disaster Relief

A previous version of Romney (was it Romney 1.3 or 1.4, I can't recall) claimed that FEMA should be sacked and its responsibilities shifted to the states, or better yet, to private enterprise. I have a better suggestion. We should allow all the states that vote Republican to rely solely on private enterprise to help them out during the next mega-disaster. The citizens in these states shouldn't complain if prices for services and basic nicities like bottled water sky-rocket during a disaster, or if companies find that saving certain stranded individuals or communities isn't economically feasible--that's the beauty of laissez-faire, after all. (Or in this case, should it be laissez-mourir?) States that don't vote Republican, on the other hand, can all cooperate and rely on the benefits of having the government coordinate relief activities. Instead of duplicating the entire relief infrastructure and training of experts, they can benefit from this exotic activity called "sharing" and this exotic principle called "economies of scale." 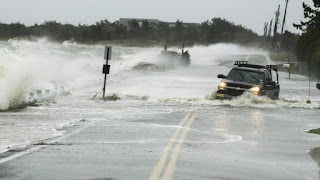 Politics are lucrative in China

A recent article chronicles Wen Jiabao's family's "mysterious" rise from poverty to remarkable wealth--a further sign of the corruption plaguing China's political system. Wen is generally viewed as a populist who has pushed for more balanced growth and egalitarian distribution. The trading on names to get financial favors is certainly nothing new. The Useless Tree has a good critical discussion:

[Excerpt] At one level this is utterly unsurprising.  This is how the PRC's political economy works. Those people who stand at the intersection of state and market in the partially-reformed Chinese economy are in a position to make billions of dollars (and, yes, it is ultimately about dollars, a globally convertible currency, as this article suggests).  And high level political leaders and their children and spouses and family members are very often the ones who push themselves into those positions.  We see the same pattern with Xi Jinping and Bo Xilai. That's how they roll at the top of the PRC system. The difference in the case of Wen Jiabao is that he has presented himself, and has been presented by the PRC media, as a man of modest means and tastes.  He was famous for wearing the same plain overcoat for years on end.  He styled himself a man of the people:  "Grandpa Wen" comforted victims of the 2008 Sichuan earthquake and personally apologized for the transportation havoc wreaked by the 2006 New Year's blizzard.  Earlier this year, he made a plaintive appeal for some sort of political reform. In all of this there is a resonance with Mencius: the righteous leader, working to secure the people's basic livelihood while personally maintaining a frugal and simple lifestyle.
Posted by Karlo at 11:10 pm 0 comments

Fix the Bayonets, Iran's Marching Through Syria to the Sea

And then there was this, one of the more enjoyable moments in the debates last night.

Thoughts on the first debate

Obama's lackluster performance in the first debate should, I suppose, come as little surprise. With polls mostly predicting a win, the strategy is undoubtedly to remain guarded and cautious in each and every statement, and unfortunately, such a strategy does not give rise to rousing rhetoric. The debate did produce a few surprises. In the wake of the 47% remark, Romney has apparently undergone a major conversion as of late, suddenly seeing the folly of decreasing taxes on the wealthy:

MR. ROMNEY: Well, sure. I'd like to clear up the record and go through it piece by piece. First of all, I don't have a $5 trillion tax cut. I don't have a tax cut of a scale that you're talking about. My view is that we ought to provide tax relief to people in the middle class. But I'm not going to reduce the share of taxes paid by high-income people. High-income people are doing just fine in this economy. They'll do fine whether you're president or I am.

I guess that the Libertarian vote and the trickle of votes from the ensconced 1% can be written off in order to get a small slice of that juicy 53%--although one has to wonder how sincere any of this is. Are we to believe that Romney will be vetoing Republican bills to provide or maintain tax-cuts for the wealthy?

Romney's plan on healthcare is to simply toss around the word "Obamacare." Obama's response on this made good sense:

PRESIDENT OBAMA: Jim, if I — if I can just respond very quickly, first of all, every study has shown that Medicare has lower administrative cost than private insurance does, which is why seniors are generally pretty happy with it. And private insurers have to make a profit. Nothing wrong with that; that's what they do. And so you've got higher administrative costs, plus profit on top of that, and if you are going to save any money through what Governor Romney's proposing, what has to happen is is that the money has to come from somewhere.

I wish somebody would stand up at these debates and state the obvious: insurance companies don't "provide healthcare." Instead, they manage risk. And if they're forced to insure everybody, they've lost their entire raison d'être. Why can't we fire these people and then send them to work in hospitals where they can make a positive contribution.
Posted by Karlo at 1:26 pm 1 comments

The qu'ils-mangent-de-la-brioche approach to healthcare


The Commonwealth Fund, with the help of Massachusetts Institute of Technology economist Jonathan Gruber, PhD, modeled three scenarios: if the ACA were fully implemented, if it had never been implemented at all, and if Romney's proposals were to take effect. They concluded that  "this approach to cost containment would shift the burden of growth in U.S. health care costs from the federal government to the states, to low-income families, and to Medicare beneficiaries, without addressing the underlying causes of rising costs." After Romney's 47% comment, this should come as know surprise. The Republican "plan" is to simply let costs keep rising while more and more people fall by the wayside. 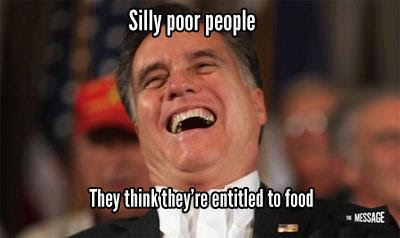