Peter Garettson has a must read piece on the need to plan long-term--and by "long-term," we're talking REALLY long-term:

What our civilization needs is a billion-year plan
Posted by Karlo at 1:28 pm 0 comments

Sizing up the Election Odds

From an article by Jay Bookman:

After all the speeches and campaign ads and debates, politics comes down to cold hard numbers. It always has; it always will. In my model, as in most such models, we start with the basics: The number of women to whom the GOP candidate’s grandfather was married at any one time, which in this case would be (4). You multiply that by the number of extramarital affairs conducted over a lifetime by the spouse of the current secretary of state (237). (CAUTION: This number could shift at any moment.) You then add the number of emails sent in the past four years depicting the Democratic nominee with a bone through his nose, which would be 457,283. You divide that by the total number of beers and cigarettes tried by the GOP nominee in his lifetime (2), divided again by the total number of beers and cigarettes consumed by the Democrat (58,399). You multiply that by the square root of the number of hair follicles transplanted into the Democratic VP (√6,798=83.53) divided by the best marathon time fraudulently claimed by the Republican VP nominee (2.55). Subtract the percentage of Americans gratuitously insulted by the GOP nominee (47), add the number of times in a best-two-out-of-three match that the First Lady would beat you arm-wrestling (3), and then also add the number of dog-lover votes — in units of tens of thousands — lost by the Republican for transporting an aptly named Irish setter (Seamus) on the station-wagon roof (236.5). Finally, you add the number of percentage points that all polls but Rasmussen are skewed in favor of Democrats (10). Voila! You now have the mortal-lock number of electoral college votes that the Democratic nominee will win in any given year.

Seen over at Pygalgia.
Posted by Karlo at 1:05 pm 0 comments

The Colbert Report on the 47%

The Monkey Cage has some nice analysis of Romney's recent 47% remarks: one post arguing that these offhand remarks seldom matter in terms of candidates' polling and another post looking into the facts behind the comment.
Posted by Karlo at 3:37 pm 0 comments

The following paper (pdf of full paper available here) provides an interesting analysis of causes of the Great Recession, analysis that we should ponder as we hear of Romney and Ryan's policies designed to greatly exaggerate current economic disparities:

Income inequality as a cause of the Great Recession? A survey of current debates

The recent debates about the role of income inequality in causing the “Great Recession” are surveyed along different dimensions. First, we review the controversy about the “Rajan hypothesis” for the United States. In his widely discussed book “Fault Lines” (2010), Raghuram Rajan argues that many U.S. consumers have reacted to the decline in their relative permanent incomes since the early 1980s by reducing saving and increasing debt. This has temporarily kept private consumption and thus aggregate demand and employment high, despite stagnating incomes for many households. But it also contributed to the creation of a credit bubble, which eventually burst, and a large current account deficit in the United States. We place the Rajan hypothesis in the context of competing theories of consumption, and survey the empirical literature on the effects of inequality on household behaviour beyond the largely anecdotal evidence provided in Rajan (2010). Second, we discuss the macroeconomic effects of income distribution in China and Germany, which both experienced pronounced declines in the share of wages and household income in national income, strong increases in personal inequality, rising personal saving rates, weak private consumption demand and strong improvements in the current account in the years before the Great Recession. Specifically, we argue that the ways in which consumers react to changes in relative income depend on such institutional factors as the deepness and regulation of the credit markets, the organisation of the labour market and the education and welfare systems, and the reactivity of monetary and fiscal policy to unemployment. We conclude that reducing inequality in these countries is crucial for overcoming macroeconomic instability and the global and European current account imbalances over the longer term.
Posted by Karlo at 7:17 pm 0 comments

A recent review of research by Smith-Spangler and colleagues (2012) is being touted in the mass media as proof that organic food isn't healthier than conventional alternatives. The media interpretation seems to be a bit misleading. While the study did conclude that the nutritional value was similar for both (which isn't a big surprise since the organic foods are usually genetically the same as conventional foods), it reported some findings that would suggest advantages for organic choices. For example, two of the reviewed studies reported significantly lower urinary pesticide levels among children consuming organic diets than conventional ones. Personally, I suspect that the advantages of organic foods might not justify the extra cost--especially for those of us on tight budgets. That said, the study certainly doesn't prove that there aren't advantages. Many of the chemical compounds that end up in our food haven't been researched enough to really know for sure whether existing levels are safe. 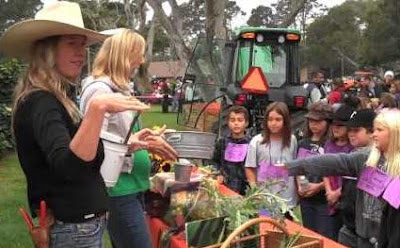 I'm biased, of course, but even so--the Republicans at the convention seem to have outdone even themselves in setting themselves up as the party of the rich. As befitting the party's character, the overall tone was snide. Clint Eastwood's rambling speech which had a missing Obama supposedly telling him and Romney to "go f--- themselves" was bizarre in that the speech writers seemed to be unable to pinpoint a single clear issue. (The "go f____ yourself" comment is so out of character for Obama that it was hard to even grasp the speech-writer's comedic intent.) The issues that were discussed--the dismal economy and the two wars--weren't very interesting as they're both legacies of the Bush mis-adminstration. Eastwood suggested that Romney would "bring the troops home tomorrow." (Wasn't Romney running as the "beef up the military" and kick-everyone's-ass president?!! Oh, well.) He claimed that Romney and Ryan would somehow bring the country together, healing its divisions. I guess this might be a possibility if we just kicked out all blacks, Hispanics, women, college students, and educated whites who live in cities.
Posted by Karlo at 4:50 pm 3 comments