It's never a good sign when a government feels it needs to sic its hounds on a few punk singers (in this case, the Pussy Riot) miming songs in a church. A disruption of morning prayers might deserve a $20 fine and a rap on the knuckles but two years!! Russia's got a long ways to go. Putin, taking a cue from the Republicans in the U.S. and tyrannical governments in the Middle East, loves to exploit religious sensibilities to shore up his rule. (This was the initial motivation behind the Pussy Riot protest). By arresting the group, the Russian government has turned a little negative PR into a fiasco.
Posted by Karlo at 1:13 pm 0 comments

The Beginning of Infinity: A review

On my recent travels, I read The Beginning of Infinity by David Deutsch. I thoroughly enjoyed the book. His sections on physics (Deutsch's area of expertise) were obscure and shocking--to say the least--and his comments in the area of philosophy of science (based on Popper's notions about the need for critiques and falsifiable theories) were useful (although Deutsch has a tendency to chase after a few straw men here and there). I even enjoyed reading the parts where the author was playing armchair philosopher and talking about the U.S. political system. (Deutsch is a harsh critic of parliamentary systems and praises the U.S. system).

Deutsch's general message is unbounded optimism (hence the title). He makes the argument that the pace and unpredictable nature of technological development makes long-term predictions little more than prophecies. This seems to be right. That said, I think he overstates his argument in some places. For example, he sharply criticizes Jared Diamond's work on the collapse of civilizations, implying that the only factor we should consider is the openness of a civilization and the inspiration of great men. However, human creativity and cultural efflorescence don't happen in a vacuum. With the appropriate academic caviats, there's no reasons why Diamond's conclusions should be discarded.

One of Deutsch's more interesting (and controversial) ideas is that humans, having achieved a civilization capable of self-criticism and endless progress, are now cognitively equipped to understand (perhaps through much ardor and effort) any advanced extra-terrestrial civilization. I'd recommend the book. It's enlightening to read somebody with enough intellectual reach to bring together so many major strands of the scientific outlook.
Posted by Karlo at 6:22 pm 2 comments

The Chinese government's struggle with openness

Today I came across a couple good pieces on China. Mark Kitto has an interesting article in Prospect that paints a rather dismal picture of China's future prospects. In a similar vein, Michael Anti has an insightful Ted Talk on how the Chinese central government uses internet censorship to crack down on wayward regional political figures and movements. 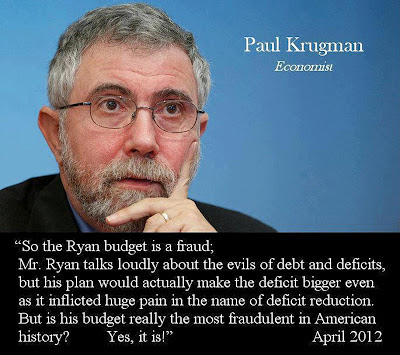 I'm glad to see that I'm not the only one scratching my noggin trying to figure out what the hell Romney was thinking in choosing Ryan. This now somewhat dated article by Charles Pierce is worth rereading:

[Excerpt] Paul Ryan is a thoroughgoing fraud. He went through high school and most of college on Social Security survivor benefits after his father's death. He voted for almost all the Bush programs — including both off-the-books wars — that ballooned the deficit he so piously condemns now. And this week, as he rolled out his lunatic conception of a federal budget, Paul Ryan produced the definitive statement of his political philosophy: There are those Americans who deserve to live and those Americans who don't. Period. All of the former are very, very wealthy. All of the latter are poor, or struggling, or old. Paul Ryan believes the true mission of government is to bring as much pain to the parasites as it can because, by doing so, it can liberate the genius of those people who deserve to live. When Paul Ryan dreams of a free nation, it is one in which the seventy-two-year-old spouses of seventy-five-year-old patients are free to go out and shop in a rigged insurance market for the $100,000-plus they're going to need over a lifetime of tending to that patient. If they insisted on feeding themselves, and even risking the odd vacation, over the course of their working lives and they failed to anticipate what might befall them, then the spouse is going to have to starve and the patient is just going to have to sit there in his own filth, until market forces determine that they should die. Look at him when he talks about dismantling the hard-won protections of the shrinking middle class. He is so positively lubricious about it that his teeth seem to be sweating. Pain (not his) purifies the nation. Pain (not his) makes us free. This is what Paul Ryan dreams of when he dreams of a free people. 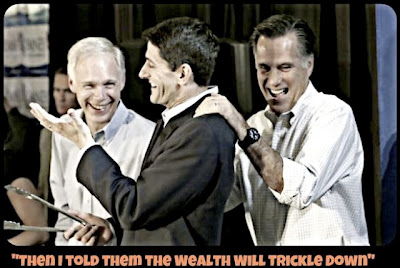 As for Ryan being a "small-government" advocate, he's better described as a typical big-government (as long as it's supporting wealthy donors) sort of politician. A New American article examines his actual voting record:

[Excerpt] ... Ryan’s voting record shows a robust support of big-spending programs to enlarge the role of the federal government, especially when they are promoted by a Republican in the White House. Ryan voted for all of the big-ticket, budget-busting items of the administration of President George W. Bush, including the No Child Left Behind Act and the prescription drug benefit known as Medicare Part D, often described as the largest expansion of the welfare state since Lyndon Johnson’s Great Society. Ryan voted to create the new Department of Homeland Security, including the Transportation Security Administration that has harassed air travelers, while making aircraft safe from shoes, belt buckles and grandma’s knitting needles. He voted for the PATRIOT Act, giving government enhanced powers for warrantless snooping into the lives of American citizens as well as foreign nationals. Ryan voted for the Troubled Assets Relief Program that bailed out the “too big to fail” financial institutions and inspired the Tea Party rebellion against big government and “crony capitalism.” He backed the auto bailout that turned GM into “Government Motors.”

And while conservatives generally like to leave wars and military spending off the list of costly “big government” programs, Ryan’s record on that front is also troubling. Like Romney, Ryan has no foreign policy credentials and no record of military service to point to in the election campaign. And like Romney, Ryan swallowed whole the Bush-Cheney line on Iraq and supported the decision to invade and occupy that country in a needless war that cost more than 4,000 American and hundreds of thousands Iraqi lives and has added roughly a trillion dollars to our soaring national debt. Ryan’s budget calls for no reduction in military spending, despite the continued presence of U.S. troops in some 130 countries around the world, most of which have no bearing on our own national security.

Even more troubling is Ryan’s vote last December in favor of the National Defense Authorization Act. The legislation included a provision authorizing the President to use the military to arrest suspected terrorists, including American citizens apprehended in the United States, and hold them indefinitely, without charges and without trial, in clear violation of due process rights guaranteed by the Constitution. This year Ryan voted against an amendment to remove that provision from the law.

Ryan did vote against reauthorization of the Export-Import Bank, which grants loans and loan guarantees to foreign governments and businesses for the purchase of U.S. products. But his vote last year for the $915 billion Omnibus Appropriations Bill for 2012 went to support further spending on housing, education, foreign aid, and other programs for which there is no constitutional role for the federal government. On The New American magazine’s latest Freedom Index, matching congressional votes with the strictures of the Constitution, Ryan’s rating for the 112th Congress to date was an anemic 67 percent.

Paul Ryan is, in short, a typical Bush-era Republican, whose selection as a vice presidential candidate is being trumpeted as a triumph by many of the same Republicans who are doing their best to flush the administration of George W. Bush down the memory hole. Republican candidates almost never invoke the Bush name and the most recent Republican President will not be attending the party’s convention in Tampa, where Romney and Ryan are expected to be officially nominated. Chances the name of the 43rd President will be mentioned in rare fleeting reference, if at all. Yet in his choice of running mate, Romney has chosen a loyal Bush Republican and reliable supporter of the programs and policies that made the Bush administration an anathema to genuine conservatives and an embarrassment to the nation.

Finally, the Ryan budget, while including a number of unspecified cuts in entitlement programs, would push overall spending higher than current levels. Despite its optimistic revenue projections, the Congressional Budget Office projects the Ryan plan will lead to a balanced budget by 2040.That suggests a rousing slogan for the Romney-Ryan ticket: “Slightly Less Socialism And A Balanced Budget in 28 Years.”
Posted by Karlo at 11:03 pm 0 comments