This excellent article deserves posting in its entirety.


This Labor Day We Need Protest Marches
Rather than Parades
Labor Day is traditionally a time for picnics and parades. But this year is no picnic for American workers, and a protest march would be more appropriate than a parade. Not only are 25 million unemployed or underemployed, but American companies continue to cut wages and benefits. The median wage is still dropping, adjusted for inflation. High unemployment has given employers extra bargaining leverage to wring out wage concessions. All told, it’s been the worst decade for American workers in a century. According to Commerce Department data, private-sector wage gains over the last decade have even lagged behind wage gains during the decade of the Great Depression (4 percent over the last ten years, adjusted for inflation, versus 5 percent from 1929 to 1939).

Big American corporations are making more money, and creating more jobs, outside the United States than in it. If corporations are people, as the Supreme Court’s twisted logic now insists, most of the big ones headquartered here are rapidly losing their American identity.

CEO pay, meanwhile, has soared. The median value of salaries, bonuses and long-term incentive awards for CEOs at 350 big American companies surged 11 percent last year to $9.3 million (according to a study of proxy statements conducted for The Wall Street Journal by the management consultancy Hay Group.). Bonuses have surged 19.7 percent.

This doesn’t even include all those stock options rewarded to CEOs at rock-bottom prices in 2008 and 2009. Stock prices have ballooned since then, the current downdraft notwithstanding. In March, 2009, for example, Ford CEO Alan Mulally received a grant of options and restricted shares worth an estimated $16 million at the time. But Ford is now showing large profits – in part because the UAW agreed to allow Ford to give its new hires roughly half the wages of older Ford workers – and its share prices have responded. Mulally’s 2009 grant is now worth over $200 million.

The ratio of corporate profits to wages is now higher than at any time since just before the Great Depression.
Meanwhile, the American economy has all but stopped growing – in large part because consumers (whose spending is 70 percent of GDP) are also workers whose jobs and wages are under assault.

Perhaps there would still be something to celebrate on Labor Day if government was coming to the rescue. But Washington is paralyzed, the President seems unwilling or unable to take on labor-bashing Republicans, and several Republican governors are mounting direct assaults on organized labor (see Indiana, Ohio, Maine, and Wisconsin, for example).

So let’s bag the picnics and parades this Labor Day. American workers should march in protest. They’re getting the worst deal they’ve had since before Labor Day was invented – and the economy is suffering as a result.
Posted by Karlo at 8:14 am 4 comments 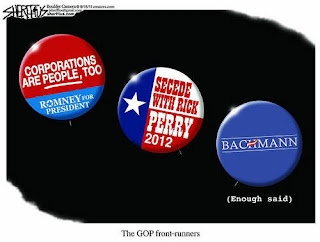 Kudos go to Jodi for posting this excerpt from Stiglitz over at I Cite. Coming from a leading economist, it's definitely worth a read:


Some people look at income inequality and shrug their shoulders. So what if this person gains and that person loses? What matters, they argue, is not how the pie is divided but the size of the pie. That argument is fundamentally wrong. An economy in which most citizens are doing worse year after year—an economy like America’s—is not likely to do well over the long haul. There are several reasons for this.

First, growing inequality is the flip side of something else: shrinking opportunity. Whenever we diminish equality of opportunity, it means that we are not using some of our most valuable assets—our people—in the most productive way possible. Second, many of the distortions that lead to inequality—such as those associated with monopoly power and preferential tax treatment for special interests—undermine the efficiency of the economy. This new inequality goes on to create new distortions, undermining efficiency even further. To give just one example, far too many of our most talented young people, seeing the astronomical rewards, have gone into finance rather than into fields that would lead to a more productive and healthy economy.

Third, and perhaps most important, a modern economy requires “collective action”—it needs government to invest in infrastructure, education, and technology. The United States and the world have benefited greatly from government-sponsored research that led to the Internet, to advances in public health, and so on. But America has long suffered from an under-investment in infrastructure (look at the condition of our highways and bridges, our railroads and airports), in basic research, and in education at all levels. Further cutbacks in these areas lie ahead.

None of this should come as a surprise—it is simply what happens when a society’s wealth distribution becomes lopsided. The more divided a society becomes in terms of wealth, the more reluctant the wealthy become to spend money on common needs. The rich don’t need to rely on government for parks or education or medical care or personal security—they can buy all these things for themselves. In the process, they become more distant from ordinary people, losing whatever empathy they may once have had. They also worry about strong government—one that could use its powers to adjust the balance, take some of their wealth, and invest it for the common good. The top 1 percent may complain about the kind of government we have in America, but in truth they like it just fine: too gridlocked to re-distribute, too divided to do anything but lower taxes.

Looking out for those who count

Andrew Levine has a good analysis of Obama's recent capitulation on the debt ceiling:

[Excerpt] Obama surrendered for one overwhelming reason --because he wanted to; because he is not just in the game to win, but to win for Wall Street. The time is long past due for liberals to face that reality, and to deal with it not, not as Obama and his advisors expect, by acquiescing out of fear that the alternative is even worse, but in a constructive way. If a Dump Obama cannot get going now, then when?
Posted by Karlo at 6:13 am 0 comments

I agree with Tom Engelhardt's recent article. Instead of a debt ceiling, we should make our first priority a war ceiling.
Posted by Karlo at 1:32 pm 0 comments

As far as I can tell from the simple descriptions of the budget deal in media clips, the new plan represents a complete capitulation by Obama and the Democrats. There evidently won't be a single revenue enhancing measure. Tax breaks for the richest Americans--that sacred cow of the Republican party--will continue as is. Exactly how this represents a "sacrifice" or a "compromise" by the far right escapes me. The only bright spot is that the bloated military budget may be cut. I'll believe it when I see it.
Posted by Karlo at 1:06 pm 0 comments