I just listened to the documentary Radically Simple featuring Jim Merkel. I like Merkel's approach and fully agree with him that living sustainably is ultimately a deeply ethical decision. I'd recommend watching it--not for information, but rather for inspiration.
Posted by Karlo at 3:55 pm 0 comments

...when a man could earn a decent living on a few acres with a little hard work (slave labor).

Bachman and Santorum recently signed a conservative pledge whose leading item was a statement that black families were stronger under slavery. We might ask why such a bizarre--and entirely anti-historical--statement was chosen to lead a pledge that was supposedly pro-family. Any analysis runs up against the fact that the conservatives are talking in code here as they often do. The logical implications of such a statement is that African-Americans are genetically inferior and can only adhere to proper Christian values when enslaved by superior white owners. We've come to expect this from Republicans--especially from the Evangelicals and Tea Party. Virtually all their statements, at their core, are essential an attack on the "lazy" poor and praise for the virtues of the wealthy. And since African-Americans make up more of the poor, we don't need a weatherman to know which way the wind blows. In short, the conservatives have adopted an ideology that would look a lot like the Sermon on the Mount if you took every sentence and converted to its opposite.
Posted by Karlo at 9:49 am 0 comments

Ersland deserves an award, not life in prison!

An Oklahoma pharmacist has been sentenced to life in prison for killing one of two people who held up his pharmacy with a gun. This makes no sense at all. When a criminal threatens someone with a gun, it should be legal to kill them. I wish I could have been on this man's jury.
Posted by Karlo at 1:02 pm 0 comments 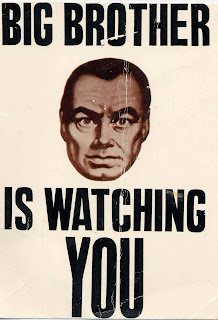 I've been listening to 1984. I read the book in a single evening and night in high school. It's great the second time around but needless to say, I have a slightly different impression after the passing of years. The book insightfully suggests that one of the greatest problems for the brainwashed people of 1984's dystopian society is an inability to analyze their situation. Essential context and facts, as well as meaningful intellectual discourse, have been systematically eliminated so that it's difficult to identify the key players controlling the levers of powers and their motivations.

1984 society has obvious parallels to North Korea where every social and material good appears to be devoted to preservation of the state and the ruling hierarchy. But similar elements of intentional misinformation are also found closer to home. A good example is the assumption, often voiced in both rightwing and "liberal" media, that the nation's misguided policies are the result of ignorance. Omitted is the more insightful analysis that the policies are all carefully designed to preserve a specific class and further its interests. To get a hold of such analysis, a person would have to look at the works of the traditional left or perhaps peruse some academic or pragmatic treatises of the extreme right wing (where the elite are so comfortable that they don't bother talking in code).

On a macro-level, the modern experiment--for want of a better term--involving industrial "solutions" that bring about problems that require increasingly complicated technological fixes ("solutions" like fracking that essentially create wealth by creating poverty) could be viewed as a great example of Orwellian "double-think"--the acquired ability to accept propositions that are obviously contradictory.

Anyway, I'd suggests rereading the book. Like all great books, it's a gift that just keeps on giving.
Posted by Karlo at 11:15 am 4 comments