War is peace; freedom is slavery...

...to the military industrial complex.

As Rachel Maddow pointed out in her show last night, the headlines about Obama's troop "pullout" are deceptive since we're only talking about removing some of the troops added during the latest surge. We're now left with the Orwellian situation where we'll draw down to DOUBLE THE NUMBER OF TROOPS THAT WERE THERE WHEN OBAMA TOOK OFFICE. It's as if we're calling the slight ebbing of flood waters a drought.
Posted by Karlo at 9:54 am 1 comments

From an article on the sudden decline of fish in the world's oceans:

the trends are such that it is likely to happen, they say - and far faster than any of the previous five. "What we're seeing at the moment is unprecedented in the fossil record - the environmental changes are much more rapid," Professor Rogers told BBC News. "We've still got most of the world's biodiversity, but the actual rate of extinction is much higher [than in past events] - and what we face is certainly a globally significant extinction event.' The report also notes that previous mass extinction events have been associated with trends being observed now - disturbances of the carbon cycle, and acidification and hypoxia (depletion of oxygen) of seawater. Levels of CO2 being absorbed by the oceans are already far greater than during the great extinction of marine species 55 million years ago (during the Paleocene-Eocene Thermal Maximum), it concludes.

This is disconcerting to say the least. Much of the world relies on wild-caught fish from the ocean for protein.
Posted by Karlo at 9:49 am 0 comments

There's something terribly fitting about spectators coming to blows as they queue up to see a murder trail (that of Casey Anthony). In other news of the ridiculous, Weiner has slowly succumbed to the media hyenas' feeding frenzy. I can't help feeling that this is really more about image than substance. One has to wonder if Wiener would have fared better if, instead of sending pictures, he would have slept with all these women. We expect our politicians to be power-hungry, but we don't like it when they begin to imitate all our plebian foibles. American politics is so corrupt that all these sexual escapades pale in comparison to the criminal enterprise we now label "government." But plutocracy and kleptocracy is old news. We all love a good sex tale or murder mystery. Slow robberies involving the entire economic system are less titillating.
Posted by Karlo at 10:50 am 3 comments

A few thoughts on the coming eugenics movement

A recent article (Could prenatal DNA testing open Pandora's box?) expresses concern about pervasive testing of the genetics of the fetus to ensure that no undesirable traits are present. It goes without saying that there could be some real problems with this: as one geneticist recently said, we really don't know enough at this point about the contribution of combinations of genes to be manipulating our children's genome. On the other hand, the same concerns could be voiced about the entire modern technological experiment. I also wonder if such manipulations will become necessary to offset the negative effects of modern medicine on the human genome. Each generation, countless of us are born with genetic diseases or dispositions that would have been fatal in the past, but we're able to survive and pass on our genes. My greatest worry is not scientific innovation per se--if it were me, I'd prefer that my child had all of my better genes and none of the defective ones. The biggest problem, as I see it, is that we live in a capitalist system where any scientific innovation will inevitably be retranslated into commodities that appeal to human beings' more selfish and shortsighted motivations.
Posted by Karlo at 1:18 pm 2 comments

What we all now know (but shan't say) about U.S. healthcare

Ezra Klein has an excellent article on healthcare summed up by the statement that the Republican plan has been shown repeatedly to not work while the Democratic plan is untried. His claim, which makes perfect sense, is that we should adopt one of the systems that has been shown to work in other advanced countries. He presents the following chart that combines both government and private costs. This is a useful graphic as it counters the misconception that other countries' cost advantage hides the extra tax burden.

I watched Super 8 today and was unimpressed. It's basically a formulaic alien monster film with poor special effects. As an avid sci-fi fan, my typical recommendation in these cases is to wait for the DVD release, but it's probably best to skip this movie altogether.
Posted by Karlo at 6:43 pm 0 comments

Giving people food: An offense against the state?

People are being arrested for giving food to the homeless. People get worked up about guns being a sacred fundamental right. If we accept that, wouldn't giving somebody food fall in the "fundamental right" category. It seems to me that "pursuing happiness" and following personal convictions or religious beliefs might require giving food or assistance to the unfortunate.


Members of Orlando Food Not Bombs were arrested Wednesday when police said they violated a city ordinance by feeding the homeless in Lake Eola Park. Jessica Cross, 24, Benjamin Markeson, 49, and Jonathan "Keith" McHenry, 54, were arrested at 6:10 p.m. on a charge of violating the ordinance restricting group feedings in public parks. McHenry is a co-founder of the international Food Not Bombs movement, which began in the early 1980s. The group lost a court battle in April, clearing the way for the city to enforce the ordinance. It requires groups to obtain a permit and limits each group to two permits per year for each park within a 2-mile radius of City Hall. Arrest papers state that Cross, Markeson and McHenry helped feed 40 people Wednesday night. The ordinance applies to feedings of more than 25 people. "They intentionally violated the statute," said Lt. Barbara Jones, an Orlando police spokeswoman.
Posted by Karlo at 9:13 am 2 comments

Since my last rant on the administration's food recommendations was so negative, I s'pose I should give them some credit where due. There are evidently plans in the works to demote that sacred staple of the American diet--the potato.


Based on a report from the Institute of Medicine, the USDA is considering new guidelines for school districts that would call for reducing the use of white potatoes, in favor of dishing out at least a half cup of leafy green vegetables, orange veggies and legumes each week.
While I'm sure that there are fairly healthy ways to eat potatoes--for example, eating them with nothing added but a little olive oil and cut up leaks--American school kids probably won't go for this since potatoes tend to be pretty bland. As someone who eats a lot of sweet potatoes (which are much healthier), I hope that they make it onto more kids' plates. I simply plop a sweet potato in the microwave and then eat it as is--often with the skin. It's a great fast-food snack! My guess is that the administration will have a battle on its hands as it takes on the food lobbies which would prefer that we live off potatoes and corn  in dishes full of corn sweeteners and poor-quality oils.
Posted by Karlo at 4:29 pm 0 comments

Palin now claims that she was actually correct in her famous Paul Revere gaffe. How a secret ride at night can be construed as warning the enemy is beyond me, but I guess I'm missing some cognitive module that allows for such stunning leaps of logic. Her constant emphasis on protecting gun rights is also beyond me. Were the British trying to ban guns prior to the revolution? If so, it's something my high school history books failed to mention.
Posted by Karlo at 1:58 pm 0 comments

The old food pyramid has now given way to the dinner plate: 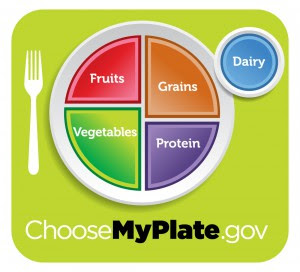 As with the food pyramid, the recommendations are patently ridiculous and probably owe more to corporate lobbying than sound nutritional science. The veggies and protein are all fine, but do people need a significant amount of fruit in their diet. Maybe (assuming that we aren't talking about just bananas and oranges). And grains? For most Americans, this is Wonder bread or perhaps a cupcake at Starbucks. How many people eat healthy grains (for example, whole-grain wild rice) as their main staple? And even if they did, how much grain do overweight Americans really need? The inclusion of "dairy" is also stupefying. Nobody except baby cows really needs dairy. Of course, excluding it would piss off a farming lobby in some key states, so it's in there.

Conceptually, the plate doesn't really make sense. Protein is a biochemical constituent of food that occurs in the other groups--particularly dairy. The plate would be a lot better if we moved grains, fruit, and dairy into the separate dish and labeled it "occasional foods" and added a "nuts and other healthy fats" category (to include only healthy nuts like walnuts and almonds). The protein category could be replaced with one labeled "fish, eggs, beans, and other healthy proteins." In its present state, the categories are so vague that they're useless. Does a bag of french fries or popcorn satisfy the "veggie' requirement for the day? Most of the fried and overcooked veggies that Americans eat have virtually no virtues. If the old pyramid got an "F", this one gets a "D-".
Posted by Karlo at 12:35 pm 7 comments