I post this comic in commemoration of fiercely disputed New Moore island which has been inundated with sea water and is thus disputed no more. When I saw the original article posted elsewhere, I couldn't help but smirk at some readers' comments--spiked tea party folk who insisted that the island must be sinking because global warming was an impossibility. But then again, maybe I don't keep up with the news enough. Evidently, the U.S. recently became socialist. I must be the main character of my own Truman Show because I still see the same unemployment, collapsing infrastructure, unemployment lines, and wide rich-poor gap that I saw before our sudden socialist turn. Obamic socialism must only be affecting the rural white counties of South Dakota from which these people harken. 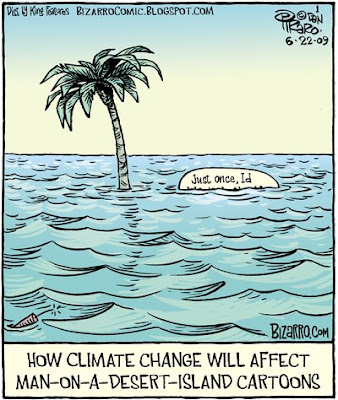 Health bill passes after all

The healthcare bill has passed. This is probably a good thing, although the bill disappoints in so many ways. It fails to reign in cost increases, which will ultimately swamp the system. It also fails to do away with insurance companies, which any decent bill would have made obsolete. On the other hand, our system has just about been destroyed at this point by elite interests and the desire for ever-greater profits at a time when most of our incomes are standing still or declining, so any change is good change.
Posted by Karlo at 9:33 am 3 comments

This is great news. Besides the introduction of the novel and radical notion that political leaders have to follow laws, the case is of interest since it involves the torture of would-be whistle-blowers. This shows why we can't allow the government to use torture--they'll misuse it.

This is the 1st time in U.S. history that court allows torture suit against current or former Cabinet Secretary

Rumsfeld asked the court to dismiss the case because he is a high-placed governmental official and argued that he was immune from suit even for allegations of torture. Mr. Rumsfeld also argued that due to his position, the Constitution permitted him to order interrogation techniques that are widely considered by human rights experts to be torture. The Court rejected both of Mr. Rumsfeld's arguments and held that high-placed placed cabinet officials can be held personally liable if they authorize the use of torture.

While many previous civil suit attempts to prosecute Bush-era cabinet officials for authorizing torture have failed, the suit brought by Chicago-based Loevy and Loevy Attorneys at Law, Donald Vance and Nathan Ertel v. Donald Rumsfeld, United States of America and Unidentified Agents, will now proceed to discovery and a trial.

Donald Vance, a Navy veteran, accuses U.S. forces in Iraq of imprisoning him without charges for over three months in 2006, and torturing him during much of that time. Vance, a private security employee at the time of his arrest in Baghdad, named former U.S. Defense Secretary Donald Rumsfeld as a defendant for his role in overseeing the military prison system in Iraq.

Rumsfeld allegedly issued orders allowing torture techniques which allowed Vance to be subjected to extreme sleep deprivation, interrogation for hours at a time, held in an extremely cold cell without adequate clothing or blankets, and periodically denied food and water for long periods of time. During virtually Vance's entire three month imprisonment at the notorious Camp Cropper near Baghdad International Airport, he was held in solitary confinement in a continuously lit, windowless cell.

"Plaintiffs…allege that in August 2003 Rumsfeld sent Major Geoffrey Miller to Iraq to review the United States prison system," read Andersen's decision. "Plaintiffs claim that Rumsfeld informed Major Miller that his mission was to 'gitmo-ize' Camp Cropper…. These allegations, if true, would substantiate plaintiffs' claim that Rumsfeld was aware of the direct impact that his newly approved treatment methods were having on detainees in Iraq…. Based on these allegations, we conclude that plaintiffs have alleged sufficient facts to survive Rumsfeld's motion to dismiss on account of a lack of personal involvement…. Accepting at this stage that these treatment methods were in fact used, we conclude that a court might plausibly determine that the conditions of confinement were torturous."

An employee of Shield Group Security (SGS) at the time of his arrest, Vance and a co-worker, Nathan Ertel, suspected their employer of paying of local sheiks for influence in obtaining government contracts and of other illegal dealings. To combat the suspected illegal activity, Vance and Ertel became unpaid informants to the FBI in Chicago and U.S. officials in Iraq. When SGS officials threatened Vance's and Ertel's lives, they arranged for U.S. military forces to rescue them. But after a few hours of interrogation and then rest at the U.S. embassy, the U.S. imprisoned Vance and Ertel, beginning their nightmarish imprisonment without habeus corpus.

Once they were in U.S. custody, low level bureaucrats invoked the unprecedented powers Rumsfeld had given them to imprison Mr. Vance and Mr. Ertel as "persons of interest" to the United States. Three months of interrogation followed, in which Mr. Vance was physically abused and denied the right to counsel, the right of access to the courts, and any legitimate process to challenge his illegal detention.
Posted by Karlo at 1:51 pm 0 comments

Radical musings on pissing, bussing, and downsizing the rich

Swerving through the internets, I've groked a recurring meme about dramatic government downsizing. Obsidian Wings informs us that Arizonan drivers will simply have to hold it now that the government is phasing out toilets. (You'd think that they'd at least spend a few dollars on planting large bushy trees next to the road each 10 miles.) Going Green Mama tells us that reductions in bussing and afterschool programs might force her to consider a private school as a cheaper alternative. If the population had any frikkin' sense, we'd all simply show up at the polls and vote for massive tax-hikes for the wealthy (or more accurately, a repeal of the massive tax reductions for the wealthy that have been enacted year after year for decades). We could then take our pisses in private while enjoying the great luxury of school bussing. Who knows? We might even occasionally see a few jet-setters stop by at our local gym before they fly off to bribe their Congressman.
Posted by Karlo at 10:44 am 2 comments

Rewatching parts of Moore's Farenheit 9/11 last night, I was again struck by the immense webs of open corruption among U.S. politicians. The connections between Bush and the Bin Laden family and Saudis have been discussed in detail but they never fail to shock me. So I must confess that the recent scandal of politicians selling earmarks to campaign contributors has little shock value. After watching years of baksheesh porn American style, it's harder to get excited by the small crowd of old geezers walking naked across the Caribbean beach. That said, it seems to me that if we're going to have a system that is so openly corrupt, we might want to rationalize it a bit further and simply have our political representatives send out catalogs of proposed bills full of corporate tax-cuts and costly weapons programs with a price tag to the right of each earmark. I can't help but think that we end up forkin' over extra moolah by forcing these people to fly down to some island to negotiate some simple quid pro quo that could be taken care of at a small diner in DC.
Posted by Karlo at 9:40 am 6 comments