I nearly chopped off my finger with the coffee grinder. Don't ask how this happened. Let's just say I was suffering from a caffeine low. The tip of my finger is looking very grue.
Posted by Karlo at 3:58 pm 3 comments

Who would like some battery acid for Christmas?
Posted by Karlo at 8:59 pm 0 comments

While many Americans feast on turkey and all the fixings today, a new study finds food waste per person has shot up 50 percent since 1974. Some 1,400 calories worth of food is discarded per person each day, which adds up to 150 trillion calories a year.

In other words, the U.S. could feed another country with the population of the U.S.--just on what we toss in the trash.
Posted by Karlo at 1:02 pm 3 comments 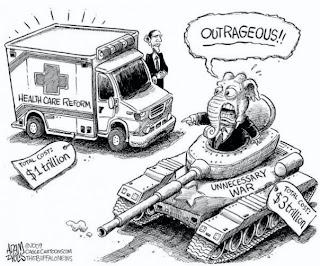 I came across this over at Pygalgia. This is definitely the "elephant in the room" as they say. I heard on the radio that we're spending a million bucks per soldier in Afghanistan (not that any soldiers are making a million per year--the money's almost all in generic black suitcases full of neatly stacked bills being handed to war-profiteers.)
Posted by Karlo at 5:31 pm 1 comments

I don't know what to make of anime figures shouting "deculture." Something perhaps lost in translation? (Or are they Palin supporters?)
Posted by Karlo at 10:33 am 2 comments

Gems from the sidebar

We've got healthcare on our mind these last few days. The Crone Speaks introduces a modicum of rationality into the recent mammogram debate. Tom Harper points out the paradox of botox in a country where many people can't afford necessary procedures:

Last year there were 4.7 million Botox injections, at an average cost of $400 each. Now — going way waaay out on a limb here — I’m gonna take a wild guess that these Botox injections didn’t come out of the rent money. Senate Democrats are making the same guess, and they’ve proposed a five percent excise tax on all elective cosmetic surgeries. Botox injections, cosmetic implants, teeth-whitening — fork it over!

Cyberkitten tickles my gigglebone with the latest incarnation of the Obama poster: 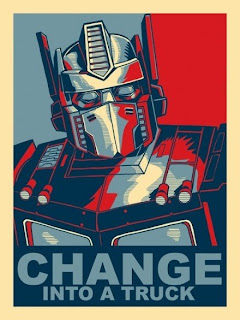 Dilbert has a funny take on all the hooplah over pig flu (reminds a bit of the endless smearing on of antibacterial soap at work).

And last but not least, Snowbabies warns us men about not listening to our female counterparts with this little morality tale titled If only men would listen:


They pass each other


Woman yells out her window, "PIG!"


Man yells out his window, "BITCH!"


Crashes into a huge pig in middle of road.
Posted by Karlo at 3:58 am 1 comments

The new Chrome OS is taking an exciting direction. I'll be happy to see operating systems that no longer have to be installed, tinkered with, and secured on my home computer. If done right, internet-base applications could provide real flexibility and would even allow us to use the same set of programs at whichever computer we use away from our desk or home. If I had an extra million, I might even buy a few stocks in the venture.
Posted by Karlo at 3:52 pm 1 comments

It's never a good sign when the only scheme that politicians can dream up for job creation is to import prisoners. I guess we could call this Reaganomics combined with globalization. The following chart shows the U.S. rate over the last seven decades. Note the great leap forward since the infamous War on Drugs: 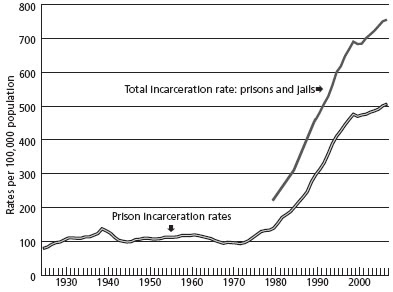 With just 5% of the world's population, we already have a quarter of the world's prisoners (almost six times the median rate). Evidently, that isn't enough for "job creation."  We're even beating out Rwanda and Russia to maintain that coveted number one spot: 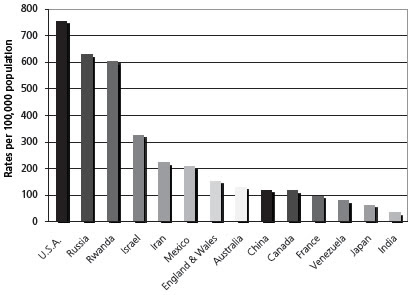 On second thought, this trend might have an upside. Maybe we can build a giant prison fence around the entire country and then all be qualified for free healthcare.
Posted by Karlo at 7:22 pm 3 comments

Healthcare in the comics

Sometimes comedy contains much truth. This was lifted from Cyberkitten: 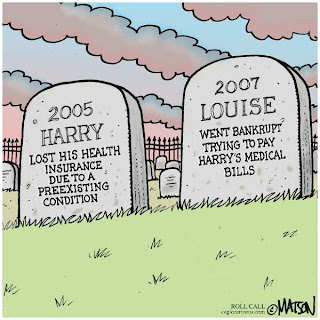 The "funny" thing is that after all the fuss is over, we won't have healthcare reform, and before long, more and  more of us won't have much healthcare. And the really funny things is that most people will claim it's always been that way. Hopefully, there will be a few old-timers left who can recall the old days when people went to see a doctor without first taking out a second mortgage on their house.


And lastly, from Arranology, an echo of the first comic: