Reading the WaPo article on Obama's budget yesterday, a few thoughts occurred to me. First, Obama is to be lauded for shifting some of the tax burden toward the wealthy, who have carved off far too much of the pie during the last few decades. Much more shifting is needed, of course, but it's a start.

As for healthcare, any plan that doesn't address costs is doomed. The fact is that our current system doesn't work. Healthcare costs in the U.S. are an obscene joke. You can shift the burden back and forth between the government or insurance schemes, and the end result will be no different as long as costs remain skyhigh. Somebody somewhere is making far too much money for the services provided. Instead of wrinkling our brows as we try to comprehend the barrage of plans and schemes coming from each successive administration, Americans should invest in a trip to any other country with even a semi-successful economy. Healthcare costs tend to be minimal. People simply don't worry about getting sick and not being able to pay. Something's seriously wrong in the U.S. and no amount of tinkering will fix it.

One thing I liked about yesterday's WaPo article was the presentation of the discretionary budget in absolute terms. We saw all these little colored lines a few inches long up and down the side of the graph and this giant line that had to run the entire length of the page to remain in scale. As you guessed, the line referred to military spending. The fact that our bloated military budget was "kept flat" is being applauded as a great success. What a joke! We're in the middle of a financial meltdown, and we still, for some unfathomable reason, must outspend the rest of the entire world combined. I propose a short bill that simply says that U.S. military expenditures, both direct and indirect, must never exceed by more than 10% the expenditures of whichever country has the second biggest military budget in the world. This would bring our military budget down to a tiny fraction of what it current is overnight while encouraging whoever's number two to reduce military spending themselves. We could then expand all of our current discretionary programs and eventually balance the budget. Or we could have free universal healthcare. (What a choice, eh? Shall we spend a trillion each year in the fight over who sells us gas, or have universal healthcare?)

Somewhere in the WaPo article, there was also a for and against discussion, regarding the tax increase on the wealthy. In what is becoming de rigueur in U.S. media, the paper had to interview someone making over 200 grand a year who "did people's hair" and "worked six days a week" and was worried about what it would mean for her. Evidently Joe the Plumber has been replaced by Jane the Hair Stylist. I'm sure that the paper walked into a shop and interviewed the owner who happened to do a client's hair on a day when she was not hanging out with friends at the local spa. In the future, I wish the media would be more straightforward about their ideological convictions and simply say up front something to the effect that they believe that the extremely wealthy class has more right to wealth due to the virtue emanating from their noble birth.

In the end, the budget is a step in the right direction, but oh, what a small and timid step.
Posted by Karlo at 11:10 am 7 comments

Quote from a bathroom stall

If voting could really change things, it would be illegal.
Posted by Karlo at 10:14 pm 4 comments

California is considering taxing marijuana, a move that would presumably remove incentives for enforcing current laws against cannabis. I'm all for this. With all the violence that's happening around the Mexican border due to drug trafficking, people need to consider legalizing most drugs.
Posted by Karlo at 8:13 am 8 comments

Obama plans to reduce the deficit by scaling back on war spending and getting rid of the tax-cuts for the rich. We'll wait and see if it happens, but it makes perfect sense to me:

...the deficit will be shrunk by scaling back Iraq war spending, ending the temporary tax breaks enacted by the Bush administration for those making $250,000 or more a year, and streamlining government.
Posted by Karlo at 12:08 pm 4 comments

This is entertaining. Go to the Executive PayWatch Database and find out what various CEOs make. You can even compare yourself. I'll need to work 500 years to make the Bank of America CEO's annual salary.
Posted by Karlo at 7:53 am 3 comments

Signs of the times 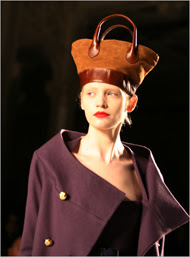 You know things are
getting bad when
women can no longer
afford hats and
start wearing
their purses
instead.
Posted by Karlo at 7:46 am 4 comments


Kudos to Sanshinseon for pointing this out.
Posted by Karlo at 3:44 pm 13 comments

An estimate says that there at least 361 intelligent civilizations in our galaxy and possibly as many as 38,000. I wonder how many of these inhabited worleds are cut up into arbitrary borders with nations bombing each other to get at fossil fuels. At any rate, I keep hoping we'll discover such a civilization in my lifetime. I think it would have a profound affect on our thinking. The odds are that anyone we discovered would be vastly smarter than us and hopefully much wiser.
Posted by Karlo at 11:32 am 4 comments

I came across an interesting graphic that provides a great picture of our economy since the "Republican revolution" and introduction of Reagan's trickle-down economics: 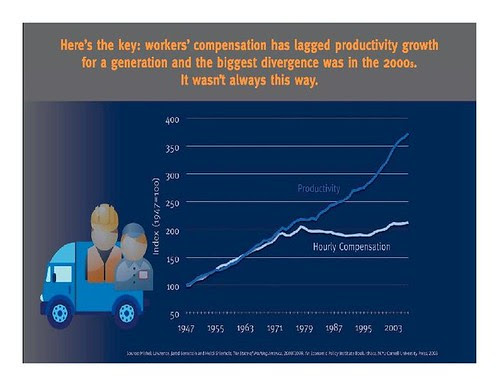 Daily Kos has an excellent post on recent trends. An excerpt:

Basically, the basic bargain was roughly this--if you worked hard and became more productive, you would see that sweat of the brow in your wages. And from the post-war era until the 1970s, that deal basically held--as you can see from the lines that are basically close together until the 1970s. Then, the lines diverge--dramatically. You can see it yourself. If the lines had continued to track closely together as they did prior to the 1970s, the MINIMUM WAGE would be more than $19 an hour.

The existence of intelligent reporters is still in controversy.

All hell's breaking loose (or so I've been told). State-subsidized bankers will now have to find a way to live on half a million a year. (No more soaking in caviar-filled hot-tubs in the private jet, I'm afraid.) To make matters worse, one of our current mavins informs me that we're all becoming puritans. Hopefully, we won't piss them rich folk off too much lest the seasons fall into disorder (quite possible, with global warming), the plants stop growing, and the livestock all refuse to procreate.
Posted by Karlo at 2:48 pm 4 comments