Does Jesus get tetanus shots?

Professor Myers (at Pharyngula) has been busy this summer, stabbing the body of Jesus with rusty nails. His post is worth reading in its entirety as a reminder of how warped the religious mind can become. In the following excerpt, he responds to the charge that he's terribly evil for disrespecting the holy host (a cracker):

I think if I were truly evil, I would have to demand that all of my acolytes be celibate, but would turn a blind eye to any sexual depravities they might commit. If I wanted to be an evil hypocrite, I'd drape myself in expensive jeweled robes and live in an ornate palace while telling all my followers that poverty is a virtue. If I wanted to commit world-class evil, I'd undermine efforts at family planning by the poor, especially if I could simultaneously enable the spread of deadly diseases. And if I wanted to be so evil that I would commit a devastating crime against the whole of the human race, twisting the minds of children into ignorance and hatred, I would be promoting the indoctrination of religion in children's upbringing, and fomenting hatred against anyone who dared speak out in defiance.

I'm sorry to say that I only aspire to be a teeny-tiny bit evil, and my target is a handful of virtually inedible crackers in my possession. It's not much, and all I can say in my defense is…it's a start. A very small start. I'm going to need lots and lots of people to rise up and follow suit, subjecting old, dishonest institutions of hardened dogma to our chief weapon of ridicule and deris…our two weapons of ridicule, derision and laughter…no, three weapons of ridicule, derision, laughter, and skeptici…oh, never mind. You know what I mean. Get to work.

OK, time for the anticlimax. I know some of you have proposed intricate plans for how to do horrible things to these crackers, but I repeat…it's just a cracker. I wasn't going to make any major investment of time, money, or effort in treating these dabs of unpleasantness as they deserve, because all they deserve is casual disposal. However, inspired by an old woodcut of Jews stabbing the host, I thought of a simple, quick thing to do: I pierced it with a rusty nail (I hope Jesus's tetanus shots are up to date). And then I simply threw it in the trash, followed by the classic, decorative items of trash cans everywhere, old coffeegrounds and a banana peel. My apologies to those who hoped for more, but the worst I can do is show my unconcerned contempt.
Posted by Karlo at 12:17 pm 2 comments

According to the Pickens Plan, building wind facilities in the corridor that stretches from the Texas panhandle to North Dakota could produce 20% of the electricity for the United States at a cost of $1 trillion with an additional $200 billion required to build the capacity to transmit that energy to cities and towns. Since we'll spend around 3 trillion in Iraq in support of the fight over who gets the privilege of selling us oil, 1.2 trillion sounds like a helluva bargain. I'm disappointed with Obama and McCain when it comes to energy policy. Neither has put forth any bold proposal that deals with the underlying problem. The Pickens Plan is actually a very modest step in the right direction. If we assume continued economic growth (perhaps not a sound assumption), 20% more electricity would merely meet the extra demands over the next decade. Even so, it would (as Pickens website says) have the added advantage of creating an economic boom and would produce some lasting infrastructure that would, in turn, encourage investment in the U.S.
Posted by Karlo at 10:20 am 0 comments

China's decision to reverse a pledge on allowing unfettered web access proved an embarrassment for the International Olympic Committee (IOC), which had repeatedly said foreign press would not face any Internet curbs in Beijing. It was also the latest in a long line of issues to have tarnished the run-up to the Olympics, which start on August 8, following controversies over pollution, human rights and terrorism threats.

It's not the IOC but rather the Chinese themselves who should be embarrassed to live under a government that spoonfeeds them information as if they were infants.
Posted by Karlo at 2:46 pm 3 comments

Is Pickens' plan a physical possibility? It calls for investing in enough wind turbines to provide 20% of the nation's energy and reducing oil imports by a third in 10 years. (This would eliminate much of the need for foreign oil.) It seems to me that if such a plan were at all possible, it would be worth doing at almost any costs. Combined with conservation measures (enacted now so that they'd have an effect in 10 years), the plan would give us a giant window of time to plan long-term infrastructure changes. I only wonder if it's actually possible. And if it is, why aren't we doing it?
Posted by Karlo at 4:55 pm 2 comments

States I've been to 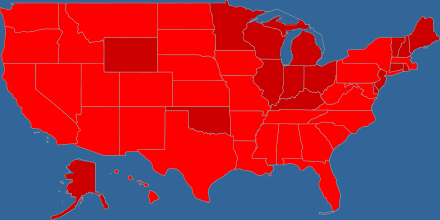 I watched Che tonight and was underwhelmed by the very mediocre film that was full of superfluous flashbacks but no psychological or political insights. Offering nothing more than bad actors with faux Spanish accents, the film didn't even provide a good summary of historical events. The script writer evidently couldn't even take the time to read a few Wikipedia entries on the Cuban revolution. Give this one a miss.
Posted by Karlo at 2:06 am 3 comments

Is it just me or does the latest Columbian hostage rescue seem highly implausible and scripted? Isn't it odd that McCain happened to have been a POW and just happened to have been visiting Columbia? And isn't is odd that there are endless glossy documentaries that instantly appear after the rescue? And isn't it strange that the Columbian government with its savage rightwing death-sqauds who are infamous for torture and killing decided to leave the area without firing a single shot after the "rescue" was complete? Would a POW who really thought he was being transferred look into a camera and talk about his service to the "glorious Columbian military?" As scripts go, I could have written this as a high school senior between my tossing spitwads at the teacher and chugging beer in the parking lot. The CIA needs to hire a new PR team.
Posted by Karlo at 5:13 am 4 comments

Clark's comments are right on:

John McCain is running his campaign on his experience and how his experience would benefit him and our nation as President. That experience shows courage and commitment to our country - but it doesn't include executive experience wrestling with national policy or go-to-war decisions. And in this area his judgment has been flawed - he not only supported going into a war we didn't have to fight in Iraq, but has time and again undervalued other, non-military elements of national power that must be used effectively to protect America But as an American and former military officer I will not back down if I believe someone doesn't have sound judgment when it comes to our nation's most critical issues.

The real story is how the news media can spin this as a controversial statement. We hire presidents because they have a good plan for the country--not for their ability to get shot down. There's a good reason for the fact that we give war heroes medals instead of political positions.