Memorial Day is a time to reflect. On the one had, we have our endless wars and rumours of wars (the war on science, the war on truth, the war on individual privacy--the list goes on). Worse yet, diversions from all the hyperbole are hard to find. Someone said that someone said that Rosie's somehow still in the news (I can't quite make the herculean effort to click on the link to that story) and Miss USA evidently fell on her arse (there's a meaningful metaphor there somewhere). And the president is babbling . . .

Trying to avoid the deluge of delusional demogogery, I tried to find a few moments of respite at the movies, but Hollywood, which now takes in half a billion on some of its productions, has created nothing but flaccid formulaic flics of no interest whassoever. You know that times are bad when Karlo watches Shrek III. Not that there's anything wrong with ogres farting in water, but I must confess that the shock value goes down on the third viewing. Even so, if you're still plugged into the matrix and are forced to watch reruns of Rosie reruns or rerants of Them Terrist Gonna Get Us!, you might want to slip away for an afternoon and watch Shrek III (or Shrek IV, or whatever they've got playing). At least the popcorn's good and the theatre's air-conditioned.
Posted by Karlo at 6:37 am 4 comments

Alabama Senator Jeff Sessions (Republican) is now pushing for withdrawal of U.S. troops from Iraq.
Posted by Karlo at 11:47 am 0 comments

It's good to hear that Obama and Hillary didn't vote for the new troops funding bill. With the money we've spent, we could have built a second Iraq on the surface of Mars. People need to remember the names of the Dems who voted for the bill and get these people out of office during the next election cycle. Of course Hillary's transformation into an antiwar candidate rings hollow at this point.
Posted by Karlo at 10:31 am 0 comments

At last, a Bush plan that just might work...

By Andy Borowitz Special to Newsweek

In a bold move to undermine the international terror network, President George W. Bush today named former deputy defense secretary and World Bank President Paul Wolfowitz to be the new president of Al Qaeda. Wolfowitz, who has no experience running an international terror organization, struck many Washington insiders as an unlikely choice for the Al Qaeda job.

But in a White House ceremony introducing his nominee for the top terror post, President Bush indicated that Wolfowitz’s role in planning the war in Iraq and bringing scandal to the World Bank showed that he was “just the man” to bring chaos and disorder to Al Qaeda. “I’ve seen Paul Wolfowitz in action,” said Bush, a beaming Wolfowitz at his side. “If anyone can mess up Al Qaeda, it’s this guy.”

Several key details in the president’s plan still need to be worked out, such as how exactly Wolfowitz will infiltrate Al Qaeda and rise to the top position in its ranks.

“Al Qaeda closely screens all of its top officers,” said Hassan El-Medfaii, head of the terror network’s human resources department. “It’s not like the Defense Department or the World Bank.”

Even if he ascends to its top post, it remains to be seen whether Wolfowitz will be happy at Al Qaeda, according to Professor Davis Logsdon, chairman of the Wolfowitz Studies Department at the University of Minnesota.

“Al Qaeda is not like the World Bank,” Professor Logsdon said. “For one thing, it’s much harder to meet girls there.”
Posted by Karlo at 8:55 pm 2 comments

The Dems have evidently caved in with the decision to give the president a renewed blank check on the war. Times like this make me proud to be a member of the Green Party. What point is there in electing Democrats if they're going to follow the exact same game plan as the schmucks they replaced?
Posted by Karlo at 7:26 am 0 comments

So what do you think? Will we soon see surge #2?

(05-22) 04:00 PDT Washington -- The Bush administration is quietly on track to nearly double the number of combat troops in Iraq this year, an analysis of Pentagon deployment orders showed Monday.

The little-noticed second surge, designed to reinforce U.S. troops in Iraq, is being executed by sending more combat brigades and extending tours of duty for troops already there.
The actions could boost the number of combat soldiers from 52,500 in early January to as many as 98,000 by the end of this year if the Pentagon overlaps arriving and departing combat brigades.

Separately, when additional support troops are included in this second troop increase, the total number of U.S. troops in Iraq could increase from 162,000 now to more than 200,000 -- a record-high number -- by the end of the year.

The numbers were arrived at by an analysis of deployment orders by Hearst Newspapers.
"It doesn't surprise me that they're not talking about it," said retired Army Maj. Gen. William Nash, a former U.S. commander of NATO troops in Bosnia, referring to the Bush administration. "I think they would be very happy not to have any more attention paid to this."
The first surge was prominently announced by President Bush in a nationally televised address on Jan. 10, when he ordered five more combat brigades to join 15 brigades already in Iraq.
The buildup was designed to give commanders the 20 combat brigades Pentagon planners said were needed to provide security in Baghdad and western Anbar province.

Since then, the Pentagon has extended combat tours for units in Iraq from 12 months to 15 months and announced the deployment of additional brigades.

Taken together, the steps could put elements of as many as 28 combat brigades in Iraq by Christmas, according the deployment orders examined by Hearst Newspapers.

Army spokesman Lt. Col. Carl S. Ey said there was no effort by the Army to carry out "a secret surge" beyond the 20 combat brigades ordered by Defense Secretary Robert Gates.
"There isn't a second surge going on; we've got what we've got," Ey said. "The idea that there are ever going to be more combat brigades in theater in the future than the secretary of defense has authorized is pure speculation."

He said that only elements of the eight additional combat brigades beyond the 20 already authorized would actually be in Iraq in December.

The U.S. Joint Forces Command, based in Norfolk, Va., that tracks combat forces heading to and returning from Iraq, declined to discuss unit-by-unit deployments.

"Due to operational security, we cannot confirm or discuss military unit movements or schedules," Navy Lt. Jereal Dorsey said in an e-mail.

The Pentagon has repeatedly extended unit tours in Iraq during the past four years to achieve temporary increases in combat power. For example, three combat brigades were extended up to three months in November 2004 to boost the number of U.S. troops from 138,000 to 150,000 before, during and after the Jan. 30, 2005, Iraqi national elections.

Lawrence Korb, an assistant defense secretary for manpower during the Reagan administration, said the Pentagon deployment schedule enables the Bush administration to achieve quick increases in combat forces in the future by delaying units' scheduled departures from Iraq and overlapping them with arriving replacement forces.

Riverbend, the internationally acclaimed blogger from Baghdad, writes about The Great Wall of Segregation... and the agonizing decision to join the two million refugees who have fled their war torn country.
Posted by Karlo at 6:12 pm 0 comments

Shrub's approval rate (28%) is down to where Nixon's was at the height of Watergate. I really don't understand this. The only possible reason that this idiot has not yet been impeached that I can think of is that there's a vast conspiracy by the Democratic Party.
Posted by Karlo at 8:27 am 4 comments

Mencius has a good post on the American caste system.
Posted by Karlo at 7:12 pm 1 comments

It's interesting to see the Republicans with their swords drawn fighting the windmills in Iraq at a time when fully two-thirds of all voters are opposed to the war. The stance may sit well with some of the Republican Party die-hards who have never seen a war they didn't like and can't imagine one either but it'll make it hard to backtrack during the general election.
Posted by Karlo at 7:05 pm 0 comments

Lt. Col. Paul Yingling has published, in Armed Forces Journal of all places, an article extremely criticial of the U.S. military leadership. His mention of leaders keeping the American public completely in the dark certainly forms part of the leitmotiv of the entire Shrubian era.

[Excerpt] After going into Iraq with too few troops and no coherent plan for postwar stabilization, America's general officer corps did not accurately portray the intensity of the insurgency to the American public. The Iraq Study Group concluded that "there is significant underreporting of the violence in Iraq." The ISG noted that "on one day in July 2006 there were 93 attacks or significant acts of violence reported. Yet a careful review of the reports for that single day brought to light 1,100 acts of violence. Good policy is difficult to make when information is systematically collected in a way that minimizes its discrepancy with policy goals." Population security is the most important measure of effectiveness in counterinsurgency. For more than three years, America's generals continued to insist that the U.S. was making progress in Iraq. However, for Iraqi civilians, each year from 2003 onward was more deadly than the one preceding it. For reasons that are not yet clear, America's general officer corps underestimated the strength of the enemy, overestimated the capabilities of Iraq's government and security forces and failed to provide Congress with an accurate assessment of security conditions in Iraq. Moreover, America's generals have not explained clearly the larger strategic risks of committing so large a portion of the nation's deployable land power to a single theater of operations.
Posted by Karlo at 8:05 am 1 comments

Der Spiegel has a story about the Piraha tribe of Brazil whose language is supposedly devoid of the features that have been thought to be universal (subordination in particular). While I am no fan of innatism and UG, I find these Whorfian claims highly questionable. The author depicts the tribe as people who live entirely in the present without any number system, words for colors, or way to describe time. The language has some interesting features, including a very limited phonological inventory in which men use one more phoneme than women.
Posted by Karlo at 7:58 am 0 comments

I just realized that the previous post was number 1000.
Posted by Karlo at 9:23 am 2 comments 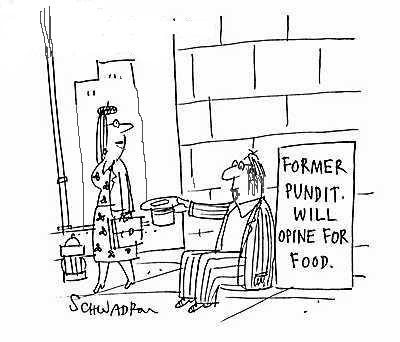 Can we survive any more "accomplishment"?

Four years later and what more has been "accomplished"? About 65,000 (reported) Iraqi civilian deaths, millions of Iraqi refugees, 3,351 U.S. troops dead, 24,912 U.S. troops maimed, and a trillion or two dollars of U.S. tax-payer money redistributed to war profiteers close to the Shrub administration.

I thought I'd save some time this next election. Instead of carefully considering the candidates stands on issues, I took the quiz at Select Smart. The super-scientific preference-figure-outer-algorithms accurately determined my fondness for Kucinich. From there, the predictions rapidly went downhill. Hillary definitely shouldn't be in my top 5 whereas Al Gore and Edwards should. I don't know who these Brownback and Thompson characters are, but they must be time-travelers from the Spanish Inquisition if they failed to score better than Gingrinch and McCain. And why isn't kat swift on the list?????????????